Program:- A Set of instructions which ​carried out by processor for some ​Specific input, generates specific output. ​​

Programming language:- A specific ​manner of writing a program with some ​Predefined rules, symbols & their use as ​a part of language.​  i.e. Pascal, C, C++, VC++, JAVA, VB.

HOW TO RUN A PROGRAM?​

Why compiler is require ?​

As machine (a processor) can operate​ On binary code instruction only…..​

If we use higher level language then …For execution of the program we must ​Convert it to lower level / machine level​ Code means, ​

A program that translates source code into object code.

The compiler derives its name from the way it works, looking at the entire piece of source code and collecting and reorganizing the instructions.​

which analyzes and executes each line of source code without looking at the entire program. ​

Languages which are very near to ​machine…. I.e. machine language, ​

Languages which are very near to ​programmer rather than to machine….​

Each variable in C has an associated data type. Each data type requires different amounts of memory and has some specific operations which can be performed over it. Let us briefly describe them one by one:

Following are the examples of some very common data types used in C:

Different data types also have different ranges upto which they can store numbers.

These ranges may vary from compiler to compiler. Below is list of ranges along with the memory requirement and format specifiers on 32 bit gcc compiler.

We can use the sizeof() operator to check the size of a variable. See the following C program for the usage of the various data types:

THERE ARE THREE TYPES OF VARIABLES IN C PROGRAM THEY ARE,

An operator is a symbol which operates on a value or a variable. For example: + is an operator to perform addition.

C programming has wide range of operators to perform various operations. For better understanding of operators, these operators can be classified as:

An arithmetic operator performs mathematical operations such as addition, subtraction and multiplication on numerical values (constants and variables).

C programming has two operators increment ++ and decrement — to change the value of an operand (constant or variable) by 1.

Relational operators are used in decision making and loops

During computation, mathematical operations like: addition, subtraction, addition and division are converted to bit-level which makes processing faster and saves power.

Comma operators are used to link related expressions together. For example:

The sizeof is an unary operator which returns the size of data (constant, variables, array, structure etc).

A conditional operator is a ternary operator, that is, it works on 3 operands.

The conditional operator works as follows:

The if statement evaluates the test expression inside the parenthesis.

If the test expression is evaluated to true (nonzero), statements inside the body of if is executed.

If the test expression is evaluated to false (0), statements inside the body of if is skipped from execution.

When user enters -2, the test expression (number < 0) becomes true. Hence, You entered -2 is displayed on the screen.

When user enters 5, the test expression (number < 0) becomes false and the statement inside the body of if is skipped.

Loops are used in programming to repeat a specific block until some end condition is met. There are three loops in C programming:

The syntax of for loop is:

The syntax of a while loop is:

where, testExpression checks the condition is true or false before each loop. 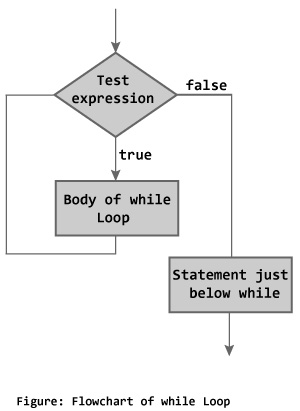 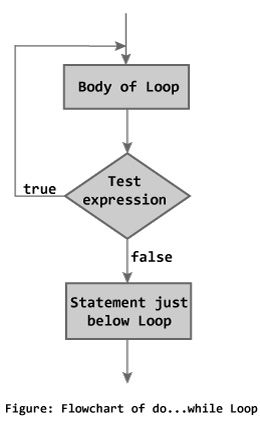 t is sometimes desirable to skip some statements inside the loop or terminate the loop immediately without checking the test expression.

In such cases, break and continue statements are used.

The simple code above is the syntax for break statement. 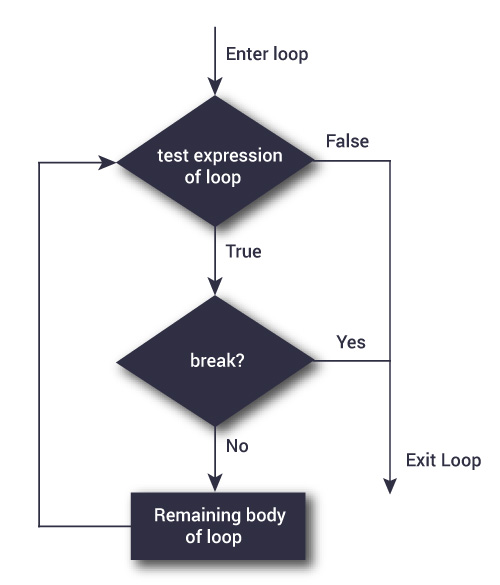 The if..else..if ladder allows you to execute a block code among many alternatives. If you are checking on the value of a single variable in if...else...if, it is better to use switchstatement.

When a case constant is found that matches the switch expression, control of the program passes to the block of code associated with that case. 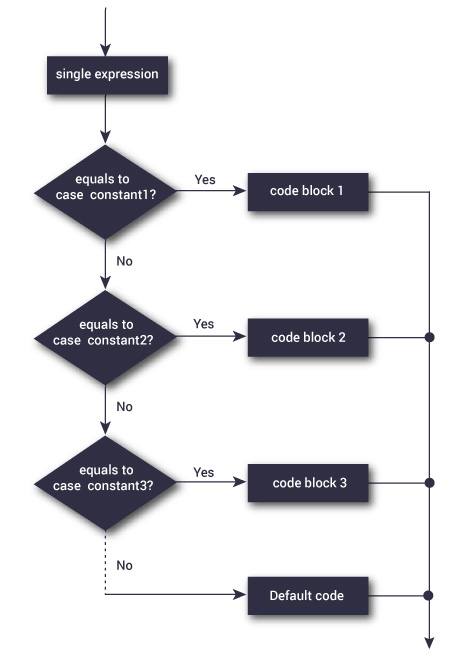 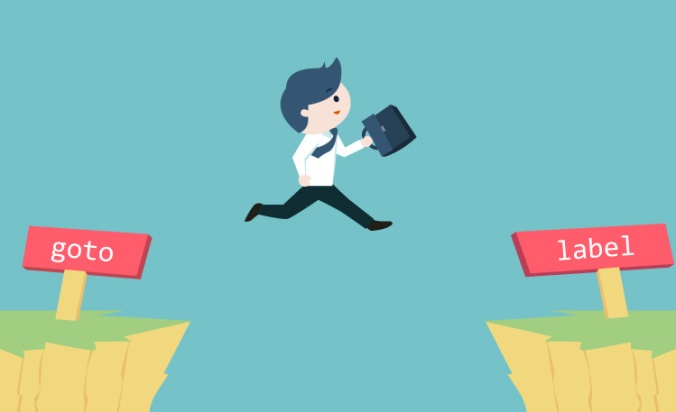 he goto statement is used to alter the normal sequence of a C program.

The label is an identifier. When goto statement is encountered, control of the program jumps to label: and starts executing the code. 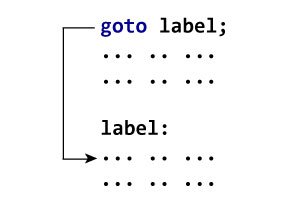 The use of goto statement may lead to code that is buggy and hard to follow. For example:

Also, goto statement allows you to do bad stuff such as jump out of scope.

That being said, goto statement can be useful sometimes. For example: to break from nested loops.

Should I or shouldn’t I use goto statement?

If you think the use of goto statement simplifies your program. By all means use it. The goal here is to create code that your fellow programmers can understand easily.

Dividing complex problem into small components makes program easy to understand and use.

There are two types of functions in C programming:

The printf() is a standard library function to send formatted output to the screen (display output on the screen). This function is defined in "stdio.h" header file.

As mentioned earlier, C allow programmers to define functions. Such functions created by the user are called user-defined functions.

Depending upon the complexity and requirement of the program, you can create as many user-defined functions as you want.

The execution of a C program begins from the main() function.

When the compiler encounters functionName(); inside the main function, control of the program jumps to

And, the compiler starts executing the codes inside the user-defined function.

The control of the program jumps to statement next to functionName(); once all the codes inside the function definition are executed

Remember, function name is an identifier and should be unique.

A function prototype is simply the declaration of a function that specifies function’s name, parameters and return type. It doesn’t contain function body.

A function prototype gives information to the compiler that the function may later be used in the program.